~NOTE~ This is a very large Twine with many image files, so it may take a bit to load.  If the screen looks disjointed, try zoomimg out.  Thank you for your patience with it!

1.01 update: Fixed a few typos, added a dialogue option to The Beauty's portion.  Also edited the part about Cafe 0 thanks to a discussion with a friend.

A Twine essay/analysis/anxious mess about the visual novel Ladykiller in a Bind, and my personal reaction to it as I played.

If playing this got you even a TINY bit interested in Ladykiller, please give it a try!  I only scratched the surface of this amazing game.  The website is here, and currently there's a Humble Bundle that includes it.

Please let me know your thoughts on this !  I am very eager to hear from other people.

Ooh, interesting. (I'm very curious about your backend and whether you were tracking any variables...)

Note for players: the following is spoilers for this twine

Playing this game made me really reflect on how absolutely, thoroughly, and comprehensively I've  pummeled my edition of The Monster into a paste.  For a long time, I've been the person friends (and... acquaintances. My bar for friend is pretty low, yet even lower than that) come to for reassurance etc. in the face of The Monster, because I both know and can carry out talking someone down. However, for most of the time I've been doing that, behind the scenes I can feel my own monster nodding along. But! It's gone! Not only has it not made a direct appearance for... a longass time, it didn't even peep in the face of dialogue of exactly the sort that's historically triggered it. Wow. I guess recovery is real???

To my memory, I wasn't tracking any variables aside from the player's name at the beginning.

And that's amazing!  Recovery is real, good for you! C: Thanks so much for playing and commenting!

whew... that was an intense read. but it was a really good one! thank you for this. i commend you for your bravery to open up about your experiences.

this blends a lot of different things that i'm drawn to. interactive fiction, literary analysis and character studies of problematic media/characters, and hearing other people's experiences. while i don't have a history with being raised religious, i did grow up with media telling me certain things were wrong or invalid or didn't matter, so in a way, speaking as a non-binary person who's struggled with feelings like yours in terms of gender identity and presentation and sexuality and feeling like i'm not appealing because i'm a certain way and because of my past... i really related to your story. and it introduced me to a vn that i'd heard about in passing through folding ideas' 50 shades videos that i didn't know much about!

i really enjoy your analysis of ladykiller, and honestly your writing was very engaging. those messages at the end were also really important, and i'd like to thank you for that, too. i really enjoyed this.

Thanks so much for playing!  I'm glad it appealed to you, and that it spoke to you. <3

I have to say, I didn't expect just how sucked into this I would get haha, I really enjoyed reading your thoughts on the game and the random interactions you put into it that made it so expressive! Playing it felt like having a long, nerdy, intellectually-stimulating conversation with a friend, which talking about depictions of queer relationships and sexuality in games is a pretty fun conversation to have.

I felt like I could relate to a lot of the topics personally, especially as a bisexual trans man who comes from a Catholic background. Years of Catholic school and experiences with certain people in my past definitely made it a slow process for me to grow comfortable with myself when it came to sex. And being trans and questioning sexuality adds a whole other layer to that. I don't consider myself a Catholic anymore I suppose, but I still feel a very strong tie to religion and spirituality. A lot of aspects of it still feel more comforting and familiar to me and draw me, but coming out as trans, being in a gay relationship, and becoming more interested in sex has made me keep my distance.

Maybe one day I'll find some kind of middle ground, but I can understand your feelings of guilt and conflict. It's something I've grappled with a lot over the years and something I continue to grapple with even now that I "know" I don't "need to feel guilty". It's hard to work through something that's been so deeply rooted into you for so long.

I still remember sitting in religion class as a freshman in highschool, I had this sudden realization of "maybe it's not a sin to have sex before marriage. it's not hurting anyone is it?" but then I scared myself and from there wondered "if sex outside of marriage isn't a sin, then what else isn't sinful...?"

It seems silly looking back on it now that I placed it on such a high pedestal that having that thought scared me, but it's hard to not think that growing up in more conservative environments. There's definitely a lot of complex emotions and feelings of shame associated with fetishes, as well, that I think fits in pretty neatly with just the way that a lot of people grow up feeling ashamed of their bodies and their sexuality, without much sex ed or encouragement on how to navigate sexual protection or how to express what they want/are interested in.

Anyways, I think I've rambled enough for now lmao, I just wanted to say that I really enjoyed playing this. It got me thinking and wanting to go and play the game you talked about for real now.

Thank you so much for playing!  I'm glad you got reading it, and hearing that it was like "having a long, nerdy, intellectually-stimulating conversation with a friend" is so sweet! ^u^
I'm glad you can relate to it.  I completely understand the middle ground and the guilt/shame--it's hard to find a place to stand!  But it's beautiful once you find it.
Thanks again for playing!  I hope you enjoy Ladykiller In A Bind--glad you're going to check it out! C:

It's funny, I also wound up playing Ladykiller as a result of watching Dan Olson's stream of it. I'd already been aware of the game since I'm a big fan of Christine Love's other work, but that stream is what sold me on it and helped me set aside my hangups long enough to play Ladykiller for myself and totally fall in love with it. Anyway, as an ace/aro person still trying to work out my own feelings about gender and about Christianity (hence the aforementioned hangups), a lot of what you wrote really resonated with me, and I really enjoyed reading (playing?) this, so thank you for making this!

Thank you so much!  I'm really glad it resonated with you, and happy to find someone else who found Ladykiller via Dan Olson's stream! C:

Reply
Teatime for Cabbages3 years ago

Really enjoyed reading your thoughts on this game. I'm an ex-Christian ace/hetero cis woman, so while my perspective's different, I understand a lot of where you're coming from wrt anxieties about sex. While my own reaction to Ladykiller was much less personal -- I think the structure and framing is brilliantly done,  so I appreciated it from that perspective, but I'm not really attracted to women -- the idea of "fiction as a safe space" really resonated with my experience of trying to explore and understand my own sexuality (and I think Folding Ideas' Fifty Shades video did a great job of laying out the concept in an understandable way). I don't know if there's a way to build a sex-positive, queer-positive framework that's in line with Christian values and doctrines, but I genuinely hope you can find something that works for you.

Thank you so much!  I appreciate that a lot.  Thank you for playing! C: 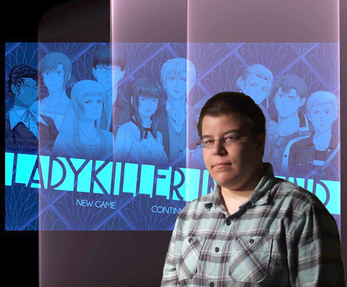